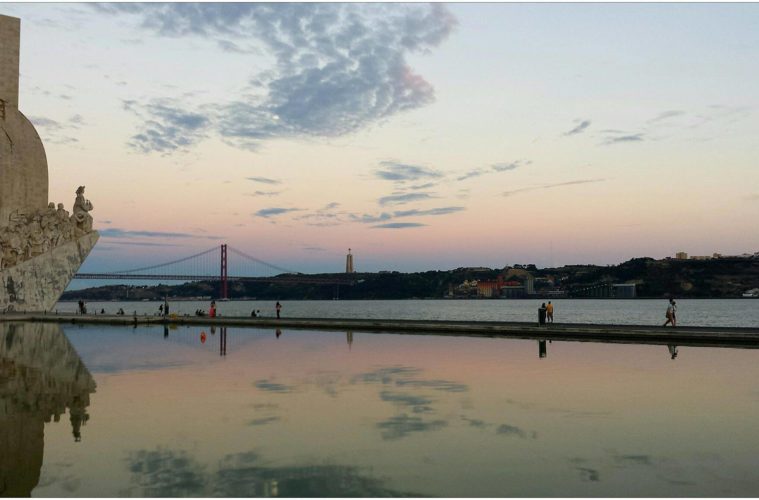 This city is a mix, colour. It is the restlessness of Pessoa, a fado. Trend and culture cover the street. In every corner, the trendiest bars invade the city. Elegant concept stores. The literary city; it is enough to go there once to understand what the famous saudade means. It’s beautiful, it’s Lisbon!

From Horse, we propose a trip of 3 days with the indispensable ones of the metropolis that is in “a boca do mundo”.

Pessoa said that “The Portuguese people are essentially cosmopolitan. Never a true Portuguese was Portuguese: he was always everything”. And this is what surprises any visitor.

The image of Lisbon is a monument to the discoverer of Brazil. They are the carnations of the revolution. Design hotels with terraces that kiss the Tagus. The legacy of Africa, India, Brazil or Macao expresses the miscegenation of the Portuguese people.

The centenary yellow tram passes. Up and down; it slides through the streets of the city all day. It has a particular sound. Its silhouette draws a postcard. The children hang back. The tourists, ecstatic, open their arms to the windows to the Tagus from its seven hills, contemplating the colorful geometry of the capital.

We’ll start the route right here. The central square of Lisbon, Luis de Camões square. The plan is to take the tram 28 to the Castelo de São Jorge, the only survivor to “a very strong earthquake that, in 1755, made the man doubt the existence of God.” 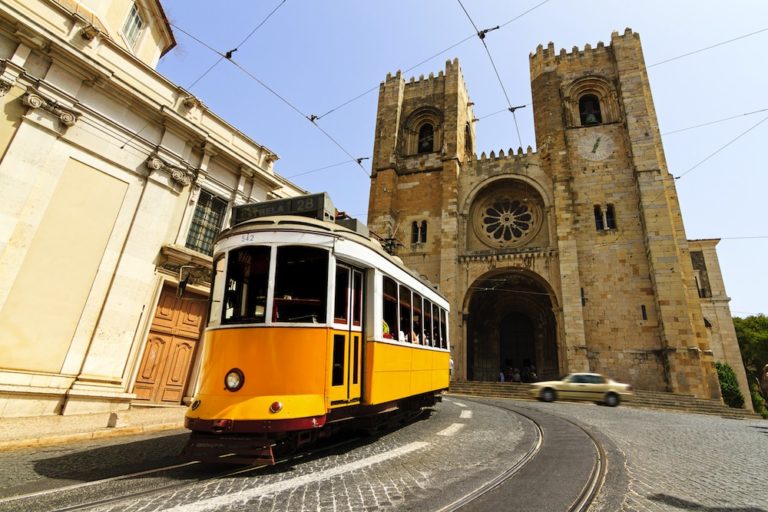 In a place full of steep streets, the Lisbon voices say that if you go down all the saints help, so the best is to stop for a break in a legendary space of the city: Chapitô.  It is a historic building, now a cultural center with a terrace with spectacular views .

The descent takes the visitor to the majestic Praça do Comércio one of the most beautiful squares in Europe. The yellow buildings embrace it, hyperbolized by the sunlight and the reflection of the river, the immense Tagus, which is the most important gateway to Lisbon, from the time when trade only made sense by the sea.

The Royal Palace, destroyed by the earthquake of 1755, was situated in the Praça do Comércio

For wine lovers, in this square we can find the Wines of Portugal Tasting Room, a shop specializing in Portuguese wines, ideal for the aperitif before having lunch.

In Wines of Portugal you can taste wines of different country’s regions  from Portuguese grape varieties.

For lunch, it is mandatory to go to the Mercado da Ribeira, very close to the square. A market full of bars with varied, fusion, Portuguese cuisine, or the tapas, which are named “petiscos”.

Mercado da Ribeira one of the most unique places to eat in Lisbon.

Up, down, stairs, another climb! We can see the Adamastor viewpoint, a city’s classical, in the legendary Barrio da Bica. The statue of the Adamastor, makes a tribute to the Lusíadas, the country’s greatest literary work, evoked by Camoes, that is, the Cervantes of Portugal.

The route takes us to the interior of the labyrinthine Barrio Alto. Right next to it, in the area of ​​the Royal Prince, the Embaixada. A beautiful palace that is now full of exclusive stores of emerging designers and urban art.

In the Ribeiro da Cunha palace we can find the Embaixada which has become a commercial gallery that houses a series of conceptual and alternative stores of Portuguese artists and brands. There are also several restaurants.

It is curious that in a city where grandmothers still tend their robes on the street, Lisbon has all the leisure worthy of Barcelona or Berlin. In the country of the poets, a new cultural movement is felt, which, like a new renaissance, will open a new chapter in the history of the capital. And a good example of this is the Park, a bar located on the terrace of a car park. It seems somewhat clandestine since it is not marked anywhere.

Park, the roof of a car park that has been transformed into a bar with incredible panoramic views.

In this area it is advisable to visit the store “O mundo fantá da sardinha portuguesa“, for its successful vintage design and, then, enter the oldest bookshop in the world, open since 1732, the Bertran.

In O mundo fantástico da Sardihna portuguesa you can buy sardine cans of the year you were born and it describes what happened in that time.

The stroll continues through the commercial area of ​​the Chiado for a traditional toast in the epic Praça do Rossio, with the typical Lisbon drink, Ginginha, in the place that bears the same name and open since 1840.

At dinner time, we recommend El beco Cabaret Gormet, a restaurant with two Michelin stars, led by the greatest Portuguese chef José Avillez, “It is a special place where haute cuisine meets the show business. A tasting of 12 different “moments” with a surprise artistic performance “ 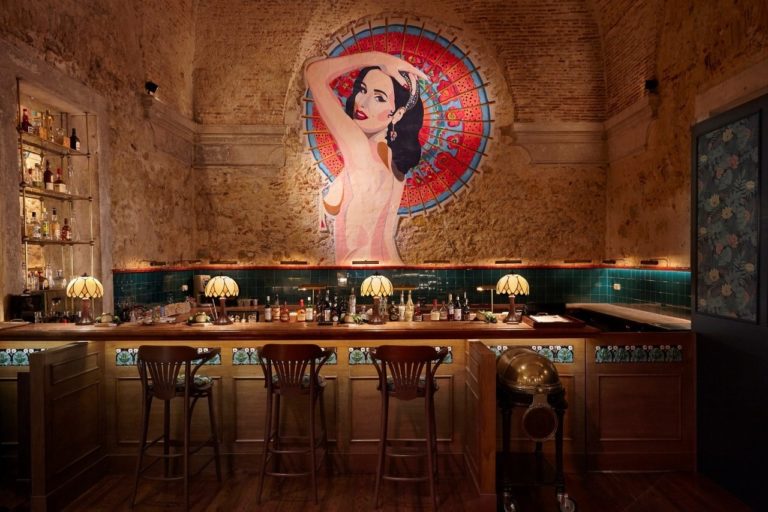 It is inspired by the Clubs of the 20s and 50s of the beginning of the century. The artist Patricia Braga painted the mural that portrays Dita Von Teese on the walls of the old chapel of the Convento da Trindade, just above the bar.

Taking advantage of the location, in this area is the Pensão do amor, a cocktail bar with three different spaces, a burlesque decoration, with live music performances, theater and performance shows, to end the day in a triumphant way.

Pensão Amor was the sailor brothel and now it has turned into the kitschest bar.

We suggest you go to the river’s marginal where you will find the most emblematic monuments of Lisbon. The Padrão dos Descobrimentos is a statue with huge dimensions of the Portuguese heroes overlooking the sea. This place is the spirit of the history of Portugal. The Torre Belém, romantic setting, a medieval tower that defended the city on the river. You have to see them, since “a picture is worth a thousand words”.

The Matt is near. It is the new museum of art, architecture and technology. An architecture of conceptual lines that breaks with its neighboring historical monuments, filling the riverside with cultural extravagance.

MAAT Museum, its architect Amanda Levete creates a wavy white tile facade that joins the Tagus River and the city.

Next to Matt, you can only have lunch in the SUD LISBON; it would be unforgivable to choose another place, this one has it all: Mediterranean food accompanied by a pool with panoramic views of the Tagus in an environment and decoration that only eyes can describe. 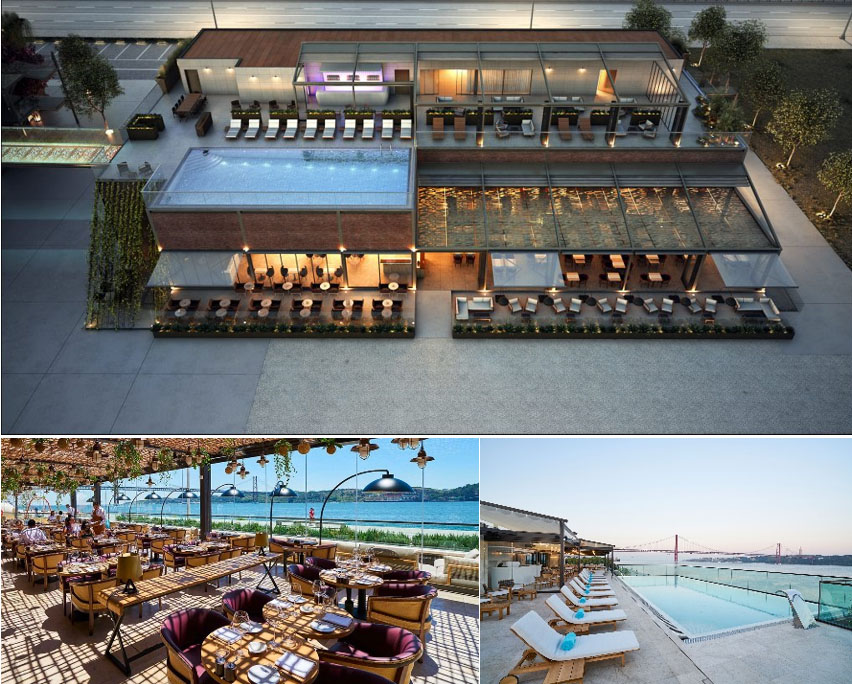 Restaurant with different interior spaces and terraces with panoramic views of the Tagus.

The afternoon in Lisbon invites you to visit the gardens of Belém, where the Jerónimos Monastery, a world heritage site, and the CCB (cultural center of Belém) designed by the architecture master Siza Vieira are located. It is a sensory experience and houses an excellent collection of contemporary art.

Before leaving Belém, the delicious chairs facing the river of Espaço Espelho d’Agua are optimal to recover energy to visit LX FACTORY – they say it is “a city within another city”, an old industrial complex transformed into a mini-town of original and artisanal stores, art galleries and creative cuisine restaurants.

In LX Factory any space is good for art.

Bistro sem maneiras is much more than the restaurant that won the prize for the most creative cuisine in Portugal; it is the ideal place to meet the intellectual development of Portuguese cuisine. Peixola, for fish lovers, presents a rich selection of fish at the bar to share in an informal dinner.

Peixola where the raw or cooked fish served has very good quality.

“Lisbon, even from afar, rises like a fair vision in a dream, clear-cut against a bright blue sky which the sun gladdens” Fernando Pessoa

The day of departure is to spend it relaxed, without eagerness to visit.

Horse proposes a morning coffee in the Ribeira das Naus that, recently rehabilitated, is today a fluvial beach with easy accessibility from the Praça do Comércio, with extensive gardens towards the river. The plan is to stop the time, enjoy, simply letting yourself be carried away by the entertaining breeze of the river.

And why not finish in the best way? We have left the most mythical neighborhood for the end, Alfama. A strong aroma of roasted sardines is enclosed in the street. Good, it’s very good. It awakes smiles on everyone who passes there, delirious to find the origin of this delicious smell. Because Alfama is all this: curious tourists looking up to what seems unattainable. The prelude is so beautiful that it’s worth the climb.

Alfama neighborhood, the oldest in Lisbon

Among the gardens of the Panteão Nacional and the small portals of those who have lived there all their lives, we find the Portas do sol, an idyllic place to say goodbye to the Tagus with the magic light of the Lisbon sunset.

According to Ana Pedro Arriscado, host of the Portuguese TV:

“It is impossible to describe Lisbon, it is a city  to be lived with all the soul and heart. And the light, the unmistakable light that is a blessing from January to January, if Lisbon had another name, would be luzboa (good light)”

For the goodbye dinner, we suggest the Clube de Fado. Luxury menu of typical Portuguese dishes where the fado is sung with the voice of consecrated artists.

In Lisbon, one is also stunned by the perfume of the Atlantic, which, more than a smell, is a feeling sung by the fado, dressed by the saudade and a feeling of which the Portuguese is proud of.

We end this express trip to the Portuguese capital, but, although the time has been little, the important thing, as the greatest Portuguese poet, Fernando Pessoa, says is:

“The value of things is not the time they last, but the intensity with which they occur. That is why there are unforgettable moments and unique people”

Ride with Horse and discover
an exclusive vision in trends, fashion,
art, design and travels 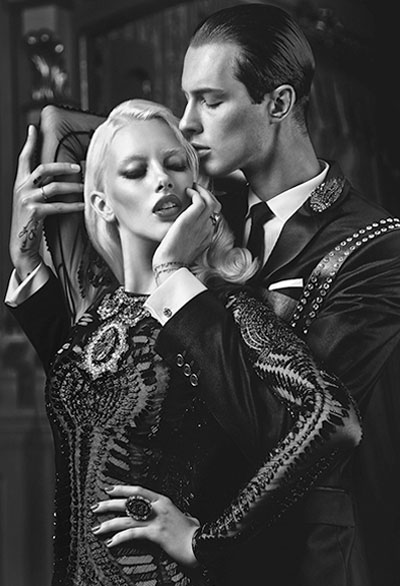